A young mother says she is blessed to be raising her baby daughter after enduring treatment for a rare condition which she was told could leave her infertile.

Holly Hampshire, 31, of Huddersfield, was diagnosed with Wegener’s Granulomatosis— a type of vasculitis– after she was admitted to hospital with severe flu-like symptoms.

As medics struggled to stabilise her, Mrs Hampshire required steroids and medication to suppress her immune system as well as chemotherapy which she was warned could leave her unable to conceive children. At first she didn’t realise how serious her condition was and didn’t want to bother doctors because she thought she just had the flu.

She said: “At first they were classic flu-like symptoms– an achy neck, a persistent headache and a runny nose. I was constantly tired. I was dedicated to work so the idea of taking time off was unthinkable. Besides, I thought the symptoms would clear up on their own. I resisted going to see a doctor because I thought I’d be laughed out of the waiting room.”

But her partner James and colleagues at the radio station where she worked, seeing her struggle, urged her to seek medical help when her symptoms worsened.

She said: “My appetite completely disappeared, which is unusual because I like my food. I was sleeping more and more, and when I blew my nose, there was quite a lot of blood. I would go to bed telling James that I hoped I would feel better, but there was never any improvement.”

“When the advisor at NHS Direct heard I had been coughing up blood, she explained that I should go to seek help immediately.” 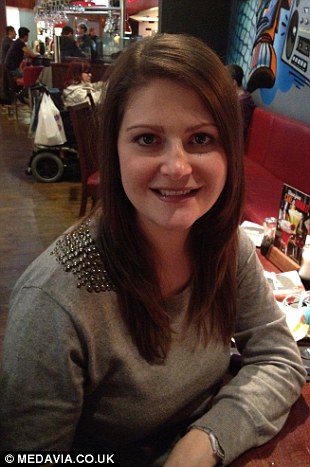 Ordeal: Her condition rapidly deteriorated and soon she was critically ill in hospital. She was initially diagnosed with tracheitis— inflammation of the windpipe– but two days into a course of antibiotics her condition continued to deteriorate and James took her directly to A&E.

There, doctors ordered blood tests, which returned abnormal results and gave her a chest x-ray which revealed lesions in her lungs.

She said: “I had some hearing loss and my gum tissue started falling away, so that I could see more and more of my teeth. Red, gritty material was coming from my eyes and I struggled to stay conscious. My mum arrived on the ward, took one look at me, and started demanding clear answers from the consultants. A lot of different ideas had been mentioned– that it was pneumonia or cancer– but nothing was clear.”

She underwent a nasal biopsy which confirmed Wegener’s Granulomatosis– a rare incurable condition which causes inflammation of the blood vessels and turns the immune system against itself.

She said: “My vital signs dropped during the biopsy. I remember one of the doctors leaning over and telling me that the crash team were on standby– I thought, Oh my God, what’s going on?”

“Wegener’s Granulomatosis is usually associated with elderly people – it was quite rare for a 26-year-old to be diagnosed with it.”

Following the diagnosis, Holly was prescribed steroids and medication to suppress her immune system, and warned that she would need chemotherapy, which can leave patients infertile. The news was a devastating blow as she and James, 36, an export manager, had planned to start a family after their wedding the following winter.

She said: “James and I really wanted children. After a lot of soul-searching I chose not to start chemotherapy straight away because I knew it could make me infertile, and just hoped the other medication would make me feel better.”

Despite the limited effects of the drugs, she was able to return home for Christmas, on the condition she returned to hospital for twice-weekly checkups. By the time she was discharged, she had been in hospital for two and a half weeks.

She recalled: “James probably had it the hardest of all. He had to watch me as I was very ill. Emotions were running high at the time, particularly when I heard I wouldn’t be able to have children. I didn’t know how much better I was going to get.”

“I suggested it might be best if we didn’t get married. But James was adamant– he wanted to stay close to me as we got through the difficult times together. I couldn’t have managed without him.”