Gene therapy was once viewed as a promising new way to treat many incurable diseases — until a tragic death occurred during a clinical trial. It’s taken nearly two decades for the industry to recover, but now several Northeast Ohio researchers are once again developing DNA as medicine.

In this week’s Exploradio, WKSU’s Jeff St.Clair looks at the science and business of gene therapy.

We’re in the auditory lab at NEOMED with researcher Hui Li. He points to a computer image of colored dots lining a small section of a mouse’s inner ear.

“So you can see,” says Li, “we got a pretty strong infection in a majority of the region of the cochlea.” 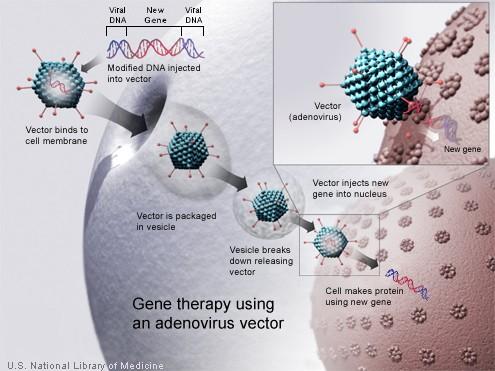 When gene therapy was first developed, the adeno virus was used as the vector to deliver DNA to the cell nucleus. But a tragic death during a clinical trial in 1999 showed that the risks of an allergic reaction to the virus potentially outweigh its utility.

Yes, he’s happy to see an infection. Strange as it may seem, Li and his collaborator Jianxin Bao are developing a virus that can infect the tiny hair cells that allow us to hear.

Li received an Ohio Third Frontier grant to develop a toolbox of viruses that can infect a range of targeted cell types, not to make them sick, but to cure them with a one-time shot of viral-delivered DNA.

The rise and fall of gene therapy
It’s a technique developed in the late 1980’s that held great promise for treating patients with diseases like cystic fibrosis, Parkinson’s or rare blood disorders that had no other viable options.