by Andrew Black for RDR

On September 8th, 2016 NFL regular season kicks off with a Super Bowl 50 rematch of the reigning world champions the Denver Broncos vs the Carolina Panthers. On the field these fierce competitors have a winning mentality, but that same drive also translates off the field for some athletes who want to raise awareness for rare diseases. Here are some NFL players/organizations that are fighting to make a difference.

If Cam Newton’s zebra fashion sense is not enough to convince everyone he is a rare disease advocate, last fall the Panthers quarterback was part of a Halloween party to support a pediatric patient diagnosed with a rare form of cancer called epithelioid sarcoma. The boy learned earlier that month that the disease had spread and that he might not make it to Halloween, so his community immediately rallied to throw him a party in honor of his favorite holiday and his favorite football player came to join in on the event.

Steve Smith, current Baltimore Raven’s receiver has been in the NFL for 15 seasons. He is known for his competitiveness and strong-willed attitude on the field. Last April, Steve got a chance to exchange his cleats for dancing shoes as he took a student diagnosed with the rare disease vein of Galen Malformation to prom.

She once saw Smith dancing on a video and thought that he would be a fun date. Word got to Charlotte-based organization Dream On 3, a charity that helps provide sports-themed wishes for kids with life-altering conditions. Smith came by with a massive limo to pick up, treated her to diamond earrings all while she was elected prom queen at the end of the perfect night.

Jason & Devin McCourty are twin brothers and starting defensive backs in the NFL. Devin plays for the New England Patriots while Jason plays for the Tennessee Titans. Jason & Devin have seen first-hand the devastating effects of Sickle Cell on family members and they have chosen to help families in similar situations.

The twins work with the Embrace Kids Foundation, a non-profit that supports children and families battling Sickle Cell. Embrace Kids exists to lighten the burden and improve the quality of life for children with cancer, sickle cell and other blood disorders in the NJ/NYC metropolitan area. Both twins attend, host, and fund events for the organization raise awareness for sickle cell disease.

The New England Patriots have worked with Progeria Research Foundation on many occasions. A memorable event was “A Day with Sam” where a Foxborough teen diagnosed with Progeria got to watch a Patriots practice at Gillette Stadium with none other than Robert Kraft, the owner of the team. Sam got to tour the facility, beginning with a stop at Kraft’s trophy room, which prominently displays the Patriots’ 3 (now 4) Super Bowl trophies.

Sam was also elected to be a captain of a Patriots’ game, but unfortunately passed the day before the game. 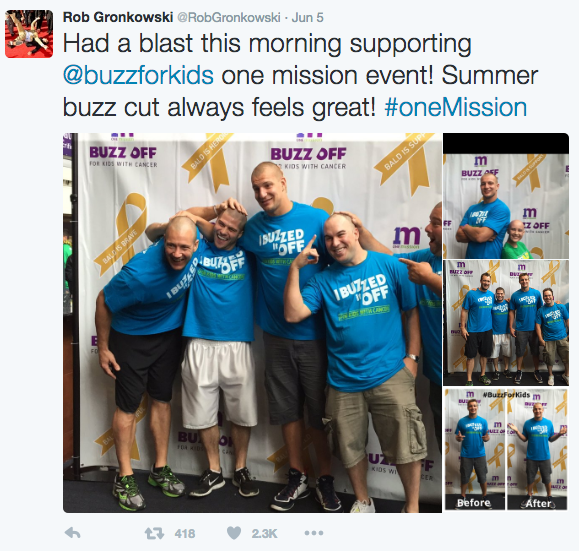